This was our second deck we built in Durban using CCA pine as a substructure. I can confirm that there is a substantial cost saving using pine as a substructure and provided it is CCA treated to the correct Hazard Level (H level), then it is guaranteed by the supplier and manufacturer against rot and insect infestation for up to 50 years. So at least H3 must be used which is good for outdoors, exposed to the elements and if there are parts of it that are making contact with ground then H4 is better. In fact the cost difference between H3 and H4 is so slight that I am tending to just use H4 throughout as a matter of course to err on the side of caution.

This deck extended from the house outwards about 5m. Half of that 5m length was on existing tiles and concrete so we placed batons of 38 x 76 and the rest of it dropped down about a metre onto soil. We chose 76mm as our width of baton because it brought us up to exactly where we wanted to be in terms of height of the deck in order to clear the bottom of the door. We therefore had very little space between joist and the tiles so there was very little packing to do. When we place batons on the ground as joists, we fix them using a hilti. The hilti is really just to stop the joist moving sideways and not really up or down as once the deck is built the weight of it keeps it from lifting up. However the hilti provides enough fixing power in both directions so sleeve anchors are not necessary. Often the ground on which you are fixing these batons / joists to, is not completely flat and in order to get the surface of the deck level, one needs to shim one end of the baton or joist. This results in one end being higher than the concrete ground level and as such a gap exists between the baton and the ground. Because these batons are relatively thin (between 38mm and 76mm) they are not strong enough in their width to support the deck. They therefore need to be packed with structural grout or a building sand / cement mixture to take up the gap between the baton and the ground. 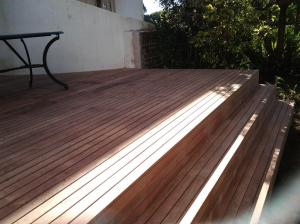 Deckboards went on without a problem, and we then built the stairs that you can see in the picture. We took a different approach to the stairs that we normally do, or have done in the past. In the past we have secured a beam all the way along the front of each riser. In this case we built treads and risers in line with each joist and then only on the front riser we fixed a fascia beam which was then secured to posts that had been set in concrete in the ground. It was much quicker than, and just as stable as our previous method. The structure that we built can be seen on one of the pics alongside.  The client wanted to leave the sides open as he is planting some indigenous plants alongside to cover the gap thus allowing his access beneath the deck if need be, but once the plants grow they will cover the sides.

This deck was left unsealed as the client wanted the greying effect. I will re-visit it in a few months’ time and if the client is agreeable we can bleach it and high pressure clean it in order to bring it back to its natural colour.