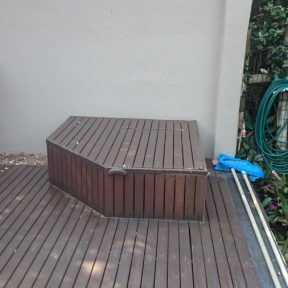 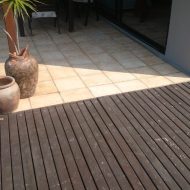 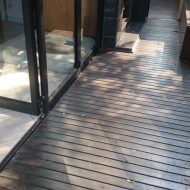 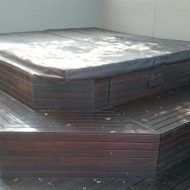 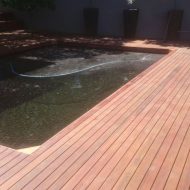 Here’s a wooden pool deck we built in La Lucia, Durban recently. In the gallery above you can see pics of the old deck and then pics of the new deck. The old wooden pool deck had started to rot at critical points. The reason for rot in many wooden decks is that the screw holes are not plugged, water gets in and travels up the end grain of the wood resulting in rot at the screw holes. Water travels more easily along the end grain of wood than the side or face grain. So it is important to seal the end grain as far as possible to prevent this. In the case of the end of deck boards the water never really gets trapped so it can drain away quickly enough to prevent rot. However in the case of a screw holes water collects in the screw hole and then has enough time to be absorbed by the end grain before it evaporates. As a standard procedure we fill counter sunk screw holes with epoxy to prevent this from happening.

The epoxy we use is clear so that saw dust can be mixed with it to match the colour as closely as possible. It is also slightly pliable. In hot and cold weather, wood expands and contracts, as does most materials. If you consider a screw hole. The sides of the screw hole will expand thereby closing the screw hole or making it smaller. Whatever is in the screw hole, as a plug, will also expand. So if the screw hole is getting smaller and the plug is getting bigger it makes sense that whatever is in there will likely try to “pop” out. Using a slightly pliable epoxy can reduce the chance of this plug popping out. Hence the reason for not using solid wood plugs cut with a plug cutter. The epoxy should be pliable enough to take up the expansion of the screw hole but hard enough not to degrade due to weather conditions.

We used 90mm balau deck boards on this deck. They are slightly more expensive but some clients prefer them to the standard 68mm boards. Being a wider board one needs to secure them on both shoulders on each joist rather than just a single screw in the middle of the boards, as is the case with a 68mm board.

The job took a bit longer than I would have liked because the substrate that we were building on top of, paving and concrete in this case, were quite uneven so we had to shim and trim joists to get the top of our joists level, flat and at the desired height to be flush with the inside of the house. The jacuzzi cladding was also quite tricky because we had to build a removable structure so that one can access the front of and below the jacuzzi. One side of the jacuzzi step is also wider than the other one so the corner required some fancy carpentry work in order to get the boards to line up and match. I’m glad I took so many pics of the deck before we removed it so that we could copy it exactly.

There were also some wedges that we had to cut along the front edge as the tiles and existing patio were not square to the wall we were building our wooden deck up against. Whenever the existing buildings are not square there is always some sacrifice one needs to make and the trick is to get it least visible to the eye. In this case the client wanted the wedges rather than cutting the tiles or bringing the front of the deck past the line of existing buildings.

For a free no obligation quote on your wooden pool deck, or other balau timber construction, please call us on 082 496 5444, or use the contact form below and one of our representatives will get in touch with you.

This existing timber deck in Umhlanga Durban had reached a point of no return and our recommendation to the client was that we remove it and replace it. It’s never a good thing to hear that you must throw it away and buy a new one because it can’t be fixed, but often wooden decks are not built as they should be built and they therefore do not last as long as they should.

From the picture alongside you can see the damage done to the posts at ground level as a result of insects. Given another year or so and those posts would have failed and although the deck might not have come falling down, it would have become unsafe and a danger to those trying to enjoy it.  See far below for pics of the finished product.

The existing deck had been built out of pine and I can only think that the wrong H class was used. As I’ve mentioned in other articles, pine used for decking purposes needs to be CCA treated to at least an H3 level and any pieces in direct contact with the ground should be treated to H4 level. You can read up more on the H levels here http://www.sawpa.co.za. In a nutshell though, off the shelf H2 treated timber will not last. And don’t be fooled by the timber yard telling you they will “double dip” it. The pressure between H2 and H3 treated timber is different, so doubling dipping H2 will not make H3, it will make H2 + H2 and it WILL rot. On the other hand if the correct H level is used the suppliers will offer up to a 50 years guarantee on this timber against rot and insect infestation. Who’s building a deck that will still be around in 50 years?

We first removed the existing deck boards so that the joists were exposed. We removed all joists but left the main beam on the front edge so that we could use it as our guide to installing the new beam. We used the existing posts as temporary posts to build our substructure, then installed our new beam and dropped posts to ground from there. We then removed the old beam and old posts and were left with a new timber deck substructure in pretty much the same place as the old one. It made our life easier and took a lot less time.

There was a gate we built and installed along the one side. We used stainless steel hinges on it. I’ve found that stainless steel hinges with bearings in the spine are not that costly. In fact a lot less expensive than brass and, in my opinion, a lot more durable. The solid brass can sometimes be a bit soft whereas stainless steel is a lot harder. This is especially the case when talking about screws. Brass screws tend to sheer of quite easily under pressure. 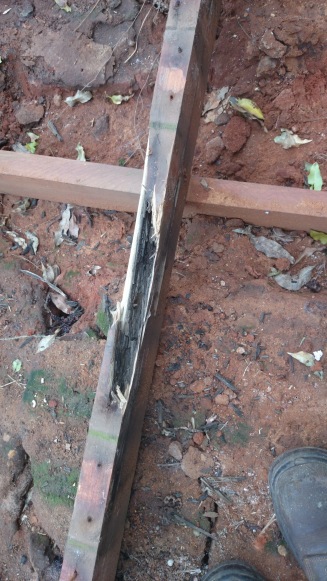 It was a nice job to kick the year off with as it was relatively simple. The only hurdle was trying to build 3m in the air on a very steep slope. We used extension ladders but still it makes it difficult and a bit slower because someone has to hold the ladder and keep moving it when screwing down pickets on the balustrade which is time consuming.

For a free, no obligation quote on your timber decking and other outdoor timber construction needs in Durban please call us on 082 496 5444 or use the contact form below. 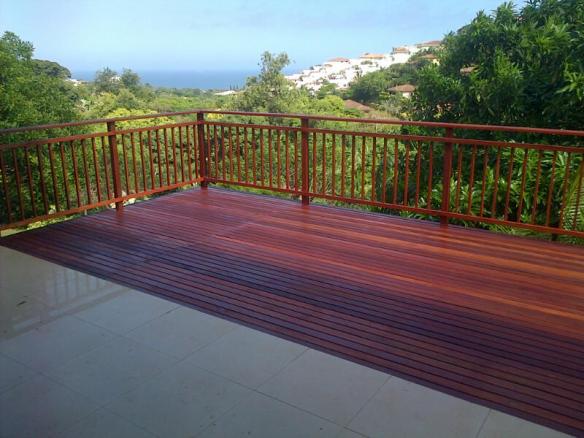