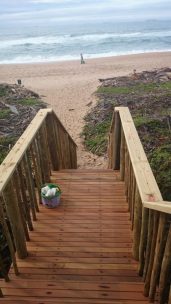 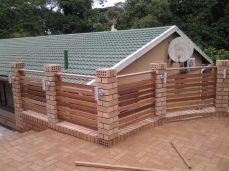 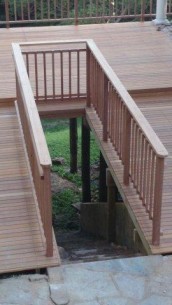 There are a number of different types of wooden balustrades one can have built for your wooden deck. We offer this product in both Durban and Cape Town. I will run through a few options in this article and will mention the pros and cons of each one.

There is a slide show above which shows the different options. I do not have fancy names for them such as Colonial, or Mediterranean. I call them simply what they are.

The vertical picket wooden balustrades are probably the only ones that are compliant in terms of building regulations as none of the gaps are larger than 100mm. They are generally made from 60 x 60 balau upright posts attached to the fascia beam or first or last joist in a wooden deck. We use the 60 x 60 upright post on the corners and in the middle of a long run. All other intermediary posts are 30 x 60 balau. There is a top rail and a bottom rail onto which the vertical pickets are attached. Rails are generally 30 x 40 and pickets are 20 x 30 balau. The bottom rail is set at 100mm off the deck surface and the top rail can be set either 100mm below the capping, or directly beneath the capping. The capping is generally made from a 30 x 102 balau giving it ample width to place a glass or lean comfortably on it. The capping is then routed to give the corners a rounded edge. The distance between upright posts is determined by the total length of the wooden balustrade resulting in equal spaces between uprights. Pickets too are set at equal spaces between uprights. This is the most affordable design of balustrade as it is fairly simple to construct.

The Criss Cross design can come in two main designs. A simple criss cross between uprights with a capping on top or a criss cross between uprights with a box in the middle of the criss cross. The two pieces of timber that are used for the criss cross are normally notched half way through each piece at an angle so that they fit snugly into each other instead of lapping over each other. The box is also set inside the two criss cross pieces so that the whole balustrade is in line rather than pieces over lapping each other. This design can be expensive as the method to construct is time-consuming and the pieces of timber are generally larger than the vertical picket design. It can also be changed to result in many different patterns.

The wire rope design is particularity useful when you don’t want to obscure the view when seated. A balustrade at 1m high will block the view in a seated position for most average height people. The wire rope is 4mm in diameter so it is less visible than say a 30mm piece of timber. The posts are generally also 60 x 60 and 30 x 60 uprights with a capping of 30 x 102 balau on top. The wire rope is set at 100mm intervals but can be opened wider as they are not tensioned to guitar string tension. As such they are not suitable if you have small kids and anything over 1m from the deck to ground level. The swages, turn buckles and wire rope are all marine grade stainless steel.

For a free no obligation quote on your timber balustrade requirements please call us on 082 496 5444 or use the contact us form below.

We are busy with a new wooden pool deck build in Hillcrest, Durban and I have taken a video to show how the substructure is built before the deck boards go down.
This is a low-level wooden pool deck that we are building which is only about 200mm off the ground. Because it is 200mm off the ground we can’t simply use 38 x 38 cleats as we have done in the past which are secured to the ground. We still need to use a joist of at least 114mm wide which is supported every 1.6m with a foot or post as there will be a void beneath the joist and the paved substrate. We have aimed to get our deck flush with the floor inside the house which is about 200mm above the paved area around the pool.

We built our substructure in a number of separate frames which are then lifted up into place on the wall side and secured using sleeve anchors. The opposite ends of each frame are then also lifted up to get the top of the joists level and flat and supported using a 76 x 76mm square post which rests on top of the paving. We will also remove some paving on every other post and sink that into the ground to ensure that the deck doesn’t sink over time if the paving sinks. The separate frames are then all attached to each other.

We have left our joists long to extend over the pool and now that the side of the frame is attached to the house we can work out exactly where we want our joists to end so as to get our fascia board on the inside of the pool completely flush with the vertical of the coping of the pool. This way we can slide our fascia down to cover the coping neatly. We can now trim our joists to the correct length and install another 38 x 114 joist running at right angles to the main joists. We could not make use of a beam and joist system here because we don’t have space beneath our joists to install a beam. We would need an extra 228mm to do this. So our frame is assembled in one single plane rather than having joists sitting on top of beams.

We’ll install some truss hangers where the joists meet the side beam which is attached to the wall. All that is holding those joists to this side frame now are two 60mm screws from behind so they need to be supported with a truss hanger to stop them ever dropping if the screws fail. Those screws are screwed into ends grain which is never that strong in terms of fixing.

The trick to this type of deck is to get the fascia frame around the pool to sit completely flush with the coping of the pool so that a fascia board (two deck boards) can be installed in the vertical plane to cover the fascia. Once that is all fixed in place and can’t move then we can deck.

Balau deck boards will be secured on top of our joists and we will start our deck boards on each side of the pool and deck towards the house and towards the grassed area. When decking towards the house we need to hope that the pool is parallel to the house and if not then we need to adjust our spaces between boards to accommodate any difference. So for instance if one side, between pool and house is 20mm shorter than the other, then we will need to increase the gaps between deck boards by 1mm for 20 boards to get the deck parallel to the house. If not we will end up with a wedged shape board as the last board which will be unsightly and will fail more easily. Also we need to try to end on a full board rather than a ripped half board as that too will be unsightly and may fail prematurely. Again we will adjust the gaps as we go to ensure we end on a full board. The gaps are normally 5mm, but we can adjust them to 4mm or 6mm without being noticed. Then we will “fill” the section between each long side of the pool and again we need to ensure that we don’t end on a half board, by adjusting our gap to 4mm or 6mm. The final result will be a deck with full deck boards and no wedges.
The grassed side is easy enough in that we can protrude over the end of the paving to end on a full board and terminate our deck there. On this end we will install a screen of 1.8m high the length of the deck. So we will tie our upright posts for the screen into the posts for our deck to secure the deck into the ground with concrete to prevent any slippage, and at the same time providing an upright of 1.8m for our screen.

For a free no obligation quote on your wooden sundeck, pool deck, balustrades, screens, cladding, walkways etc. please contact us on 082 496 5444 or use the contact us form below. 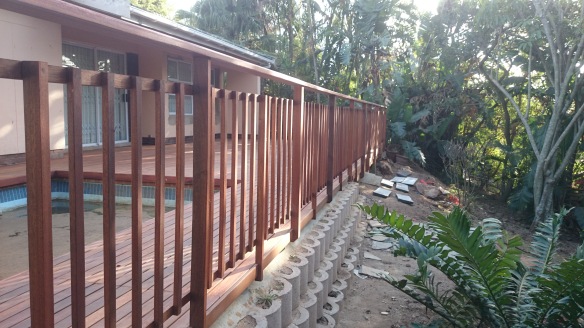 Here was a nice size wooden sun deck, or pool deck, we built of approximately 60m². I say a nice size because at that size one can reduce the costs slightly, pass a saving on to the client, and make a little bit more money on the job. 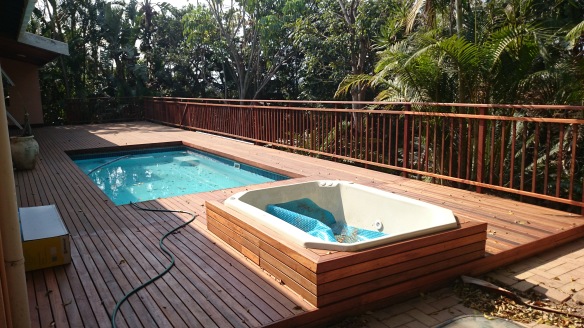 This wooden sun deck was built around the pool as you can see from the pics alongside. It also extended to the far end of the house and was enclosed by a balustrade on two sides with two gates leading to the garden. Access to the deck was from two bedrooms on one end in front of the pool and from the lounge on the other end. The level of the floors, in the rooms, near the pool, were not the same level as the level of the lounge floor so we were left with a choice to either step the deck or have a small step up to the lounge. We chose to create a small step up to the lounge because having a step in the middle of your wooden pool deck is only going to lead to someone tripping and hurting themselves.

In this article I want to write about the different ways of laying the boards when it comes to pool decks or any other deck where the boards can possibly run in both directions. If a deck needs to be built with deck boards all running the same way it is relatively easy to install them in that the ends do not need to match up. The problem one can have in trying to match up ends of deck boards is that if they are not cut at precisely 45° then the length of the cut ends will differ. I’ve drawn a sketch alongside to illustrate this.

It is highly unlikely that any pool will be perfectly square. When installing the wooden pool deck it may be necessary to cut one end at say 44° and the matching board that runs at right angles to it, at 46°. The two ends will not be of equal length and will therefore not match up flush with each other. The problem is compounded with each deck board that is added. Let’s assume that the one cut end is 2mm longer than the other. After installing 15 deck boards (or one metre) the boards will have shifted by 30mm (15 x 2mm). This will be unsightly. The problem is also compounded by the variance from 45° which results in the difference in lengths of cut ends being greater.
There is a way to overcome this problem and that is to install a joiner between the cut ends as the sketch alongside illustrates. The other way is to run the deck boards all in the same direction (i.e. not all parallel to the edge of all sides of the pool, but rather all parallel to each other).

For a free no obligation quote on your pool or sun deck, or any other outdoor timber construction, please call us on 082 496 5444 or use the contact us form below.